The story of Les moules

The history of bouchot mussels

“According to a 16th century text, bouchot mussels came about after a shipwrecked Scotsman, Patrick Walton, ran aground in the bay d’Aiguillon in 1235. He decided to stay in the region, and wanted to hunt seabirds for a living as he used to in Scotland. So, he drove wooden poles into the ground near the coast and stretched nets between them. Mussels began growing on the poles, and he realized that it was more profitable to raise shellfish than to hunt birds. Thus, bouchot mussel farming was invented. In 1954, the modern mussel aquaculture industry took off in the Bay of Mont Saint-Michel, and the Normandy region remains the leading producer of bouchot mussels.”
Source www.wtseafood.com

Why are mussels so special?

“Mussels have the most impressive nutritional profile of all shellfish. They contain high levels of highly desirable long chain fatty acids EPA (eicosapentaenoic acid) and DHA (docosahexaenoic acid). These fats have many beneficial effects, including improving brain function and reducing inflammatory conditions, such as arthritis. Mussels are also a brilliant source of vitamins. Plus they give you a shot of important minerals, such as zinc, which helps build immunity. Mussels even contain levels of iron and folic acid to rival red meats.” 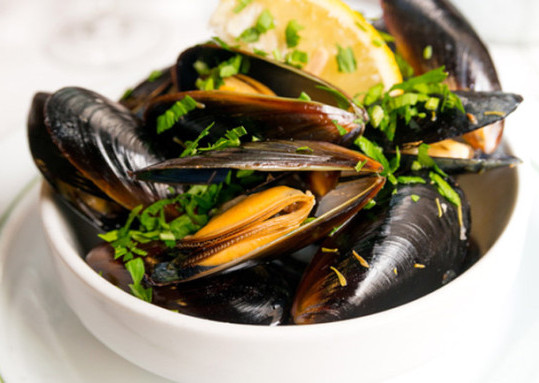